Blog 9. Back Home + fun with Duplo+a photo shoot in Wales


I absolutely loved being away, pedalling across France (well, I have to admit now I suppose that my legs couldn't reach the pedals so Mark had to do all the pedalling.  Shame, really!) and being in Paris with all those wonderful animals and people.  But it's nice to be home and get out our favourite toys.  Orson and I love making up funny stories.  The pig was getting ready to go out so is having a shower (you know how mucky they get!) and we had a good idea that trains could be powered by chickens.  Actually that's not totally mad.  Gas from chicken manure has been used to power cars before.

Then we had a brilliant idea.  Our teacher had been telling us about our 'carbon footprint' which is about how things we do every day (or actually adult humans mainly) make 'greenhouse gases' which warm up the world too much.  Why don't we make it easier to understand by making towers for each bit of our lives which are as high in bricks as the greenhouse gases that they each make? Does that make sense?  Each brick is half a tonne of gas.
Home is bigger than land transport.  The main thing for home is to make sure it is warm and cosy through insulating it (just like my puffy feathers) and stopping draughts. Can you guess what the main bit of land transport is (answer below)? Food is a lot and you know from me and the french cow last week, that eating less meat, less dairy and more organic can make the tower much less.  The yellow tower is even bigger that is mainly about buying stuff - so make sure you only buy what you need and get stuff that lasts (and don't be a fashion victim- I've been wearing the same blue feather coat for years!). There is a giant tower if you take a long aircraft flight.

If you join all the towers on top of each other there are about 26 bricks for Mr or Mrs Average British-Human.  But much smaller towers for two other very big nations.  Do you know their flags (clues: one has the Taj Mahal, and the other makes a lot of the toys and electronics we like)?  It's not very fair is it?  You humans, especially from better off countries like in Europe and US need to make more effort to reduce the towers.  Actually they need to be more like the height of the tower on the left.

I forgot to tell you that Mark's great nephews and nieces of Mark took me out in the Wye valley in Wales for a photo shoot before I left. They used their phone cameras.

It's been great telling you all about my adventures.  Phew!  Now I'm completed exhausted. Time for bed.   Perhaps I will dream of another adventure - but not for a while!

Bye bye but don't forget - tell everyone the Climate is precious and so are we animals! 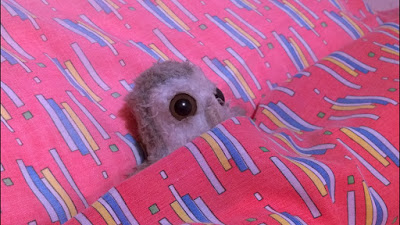 
Oswaldo, the Furry Blue Owl (and there isn't a rarer species!)

Answers from Oswaldo the Wise:

1. Cars make by far the biggest part the climate changing gases from personal land transport (approximately 80% ).  So if you need to buy a car, it's always worth getting a smaller more efficient car or even an electric one.  Walking and bicycles are the best, but if you have to go very far buses and trains are much less polluting than cars.
2. India (the smallest tower).  China.