Blog 8. Oswaldo Owl -TV star. A poem for you

Hi Littlest and Most Important Humans,

I hope I am not showing off, but I’ve learnt enough French to read a paper or bits of it.  The paper is a famous French one called ‘Le Monde’.  Anyone one of you know what that means?  The headlines seem to be about COP21.  French telly was also on COP21 because the leaders are now arriving, excitement and expectation rising.

Yesterday I went to the centre of Paris and met the most amazing number of animals who had come from all over the world to tell the leaders to Act for Climate Justice – justice because we need to do it for the poorest countries who are most affected.   Of course, I spoke to them in animalese so you wouldn’t understand it I’m afraid, but they were all so happy to be there together to show that all species are in it together. 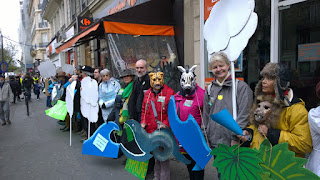 And I was interviewed on the telly!  This might go to my head so remind me to calm down if I get to boasting.  I got all shy so Mark had to do the talking - but I'll be better at it next time. 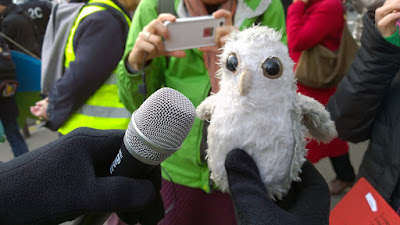 Did I tell you that some of the humans had cycled from Vietnam starting in February, walked from Rome from September, wearing out their shoes.  Dan from ‘Pole-to-Paris’ had cycled from New Zealand and you couldn’t get any further away, arriving after 10,000miles.  I gave him your postcards.  He will give them to the most important people in the United Nations so they will read them – at least some and get the message that you care!  Did you know when you wrote them that people from all over the world and important leaders have read you cards!  It’s a wonderful way to tell people. 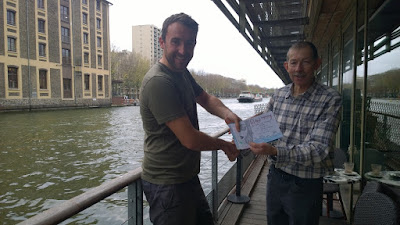 Don’t be afraid to tell or remind your parents how important to do all we can to defeat Climate Change.  Remember that big humans tend to forget, poor things, because they often get confused by the smaller things in life.  Mark is a particularly bad example.  You should see him get annoyed at his computer when it doesn’t do what he expected!  But you know what is important.

Poem for the Paris Summit and local schoolchildren:

Look out for the Earth as you would
a good friend – one whom you value highly.
It’s not an old umbrella you could
use and neglect, that bends and breaks
in the wind, to be tossed away.
It can’t be replaced at the drop
of a hat. It’s special and caring -- so play
and spend time with it.  That’s friendship!

On behalf of all the children, thanks Joan!

Please send in any comments.  I love hearing from you and you may get a reply!