We had a fantastic send off at the prize-giving for the post-cards at the Pennington Solar Farm.  The mayor was there and all eleven winners to get their prizes of solar lights from Solar-Aid.  They were made for poorer countries where they can’t just flick switch because there is no reliable electricity to even read at night.  Imagine what a difference that would make on these dark winter nights.   For every 1 of these solar lights sold in the UK, 3 more are given away in the poorer countries without electricity.  Picture below, the prizewinners, the mayor, Mark who is glowing like an alien (scary!), and me snug on the bike waving the French flag.


It’s a good example of technology for good like the solar farm.  It has 9000 panels which make enough electricity to power 650 homes and it makes no greenhouse gases.  There are not many days in the year when there is not a little sun for the solar or a little wind for wind turbines somewhere in the UK, so we can make a lot more clean energy in the future.

Sometimes we can have just too much stuff but I just love good technology like Mark’s new GPS. It  uses satellites to show us where we are on the map to Paris.  GPS has so many good uses besides not getting lost on a bike.  Little GPS's are put on wild animals to find out their movements so we know how to look after them better.
I like the messages on your cards as well as the pictures. 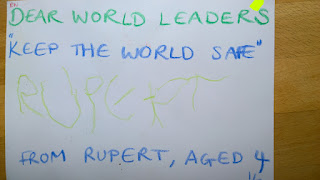 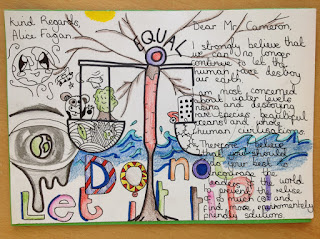